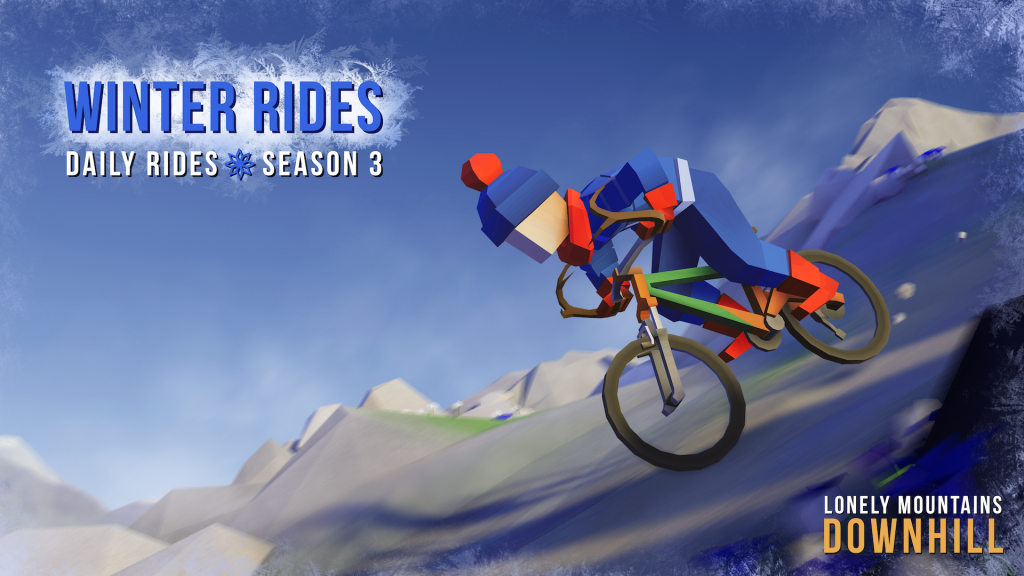 We are happy to reveal that the next free Daily Rides season for Lonely Mountains: Downhill is dropping today!

We are happy to reveal that the next free Daily Rides season for Lonely Mountains: Downhill is dropping today!

Daily Rides Season 3 is titled Winter Rides and brings with it some fun new unlockable outfits and accessories! Lonely Mountains: Downhill and the Eldfjall Island DLC pack are available now on Nintendo Switch™, Xbox One, PlayStation®4 and PC (Steam®).

Players who take up the challenge of the Winter Rides season can unlock some cheerfully chilly winter-themed goodies. New clothing/cosmetic options waiting to be unlocked include the Winter Outfit, a blue and red ensemble which comes complete with a woolly bobble hat, puffer jacket and warming scarf sure to keep you going during those brisk outdoor descents. The Christmas Elf outfit in classically festive green and red will turn your rider into one of Santa’s little helpers.

Speaking of the big man, there’s also a Santa beanie and Santa outfit. A fresh accessory is available in the Christmas Bag of Presents and there’s also a new Rudolph Paint Job for your bike, complete with antlers for a true reindeer look and feel. To top it all off there’s another new style of outfit, the Snowman. This magical festive garment works a little differently to standard outfits, transforming your character into an actual snowman with a stylish top hat. Winter Rides offers up a stuffed stocking of goodies to grab, so get out there and get riding!

Lonely Mountains: Downhill was initially released on October 23rd in 2019. During its first year, the game has been a hit amongst players and critics alike; resulting in more than one million players (1.2 million as of September 2020). The game won awards such as “Best Indie Game” at the German Developer Awards and “Best International Indie Game” at Poznan Game Arena.

For any players wanting more (virtual) outdoor biking action, the Eldfjall Island DLC pack was released in October this year. Eldfjall Island comes complete with brand-new challenges for each of its four trails. Players will be able to unlock new outfits, paint jobs, and accessories. You can either take your time enjoying the scenery or race down the mountain as quickly as possible to climb up the leaderboards. Additionally, new weather and environmental effects will make the journey even more intense than ever before with thunderstorms and an active volcano!